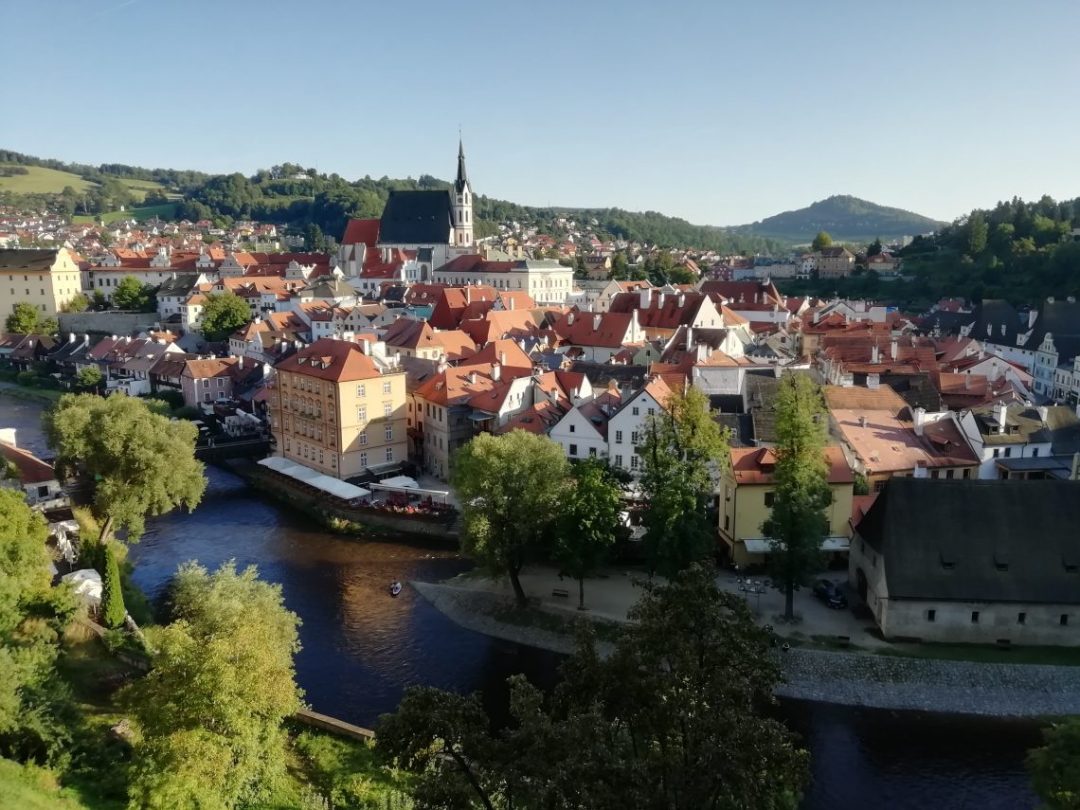 Good travel stories usually start with a mishap, from which point of view I fail you. This time we
didn’t forget anything, we didn’t miss any transport, all five days were sunny with the exception of
one short thunderstorm, the accommodation was absolutely fabulous and the streets of Český
Krumlov were nearly our own. What else can one wish for? Maybe for a little more time.

Český Krumlov is a beautiful town. While visiting though, I felt on occasions that I was in a ghost
town. The ground floor of every house was a shop with clothes or souvenirs, or alternatively a
restaurant. The part above of nearly every building is a guest house. This isn’t a town organized for
ordinary life. The crowds of tourists streaming through its arteries are its blood. Without them
Krumlov seems abandoned. I asked Ben, how many people he thought lived here, truly lived here.
He answered: “Fifty to a hundred.”

Český Krumlov is not a place for living but, it seems to me, a beautiful theatre stage prepared for a
performance about to start. I liked it this way rather than having to push through crowds.

The historical centre of Český Krumlov spreads within two loops of the river Vltava. In Latrán, where
castle personnel lived you can see the famous Krumlov castle. While Parkán, which served mostly
traders, is on the opposite bank. Both quarters contain small, romantic houses which are part of
UNESCO World Heritage.

On the first day, we immediately set out to wander through the streets and found out that there is
not much space to get lost in. The center is really small and wherever we went we always finished
back at the castle.

I was surprised that the historical center was so small and can be walked through so quickly, even at
our reconnaissance speed. The local castle is the second biggest in Czechia right after the Prague one
and the locals would have built it bigger if they had not been worried that they would alienate
Prague.

Only a short walk from the gate of the historical center, we discovered on the left side a crafters’
street. Only a few of the shops of various crafters were open. We had a look at the leather products
and bought a few souvenirs in the smithy. I was sorry that the bookbinding workshop was not open,
that would be the one most interesting for me but on none of our walks through the town did we
see it open. Though on the weekend a woodcarver’s stall appeared where a nice gentleman sold
handmade molds and stamps for baking.

A little further on from the crafters’ street on the right-hand side, we were welcomed by an entry to
the castle. Two bears live in its ditch. To tell the truth, I was not certain what to think about it.
Though the locals love them and support them in any possible way and every visitor stops here to
look at them, I cannot say if it is a good environment for them.

The entry to the five castle courtyards is free and it is possible to walk through them into the
baroque gardens with the famous theatre with its revolving auditorium. We didn’t see it as we only
had a glimpse of the gardens. That evening there was a performance and so at six o’clock, the guard
started to chase out the admiring groups and couples. It was the only evening when we saw more
people walking through the castle. We didn’t get back to see the gardens afterward, we were too
busy visiting other interesting places. Maybe, one day we will come here to see a play.

There is a beautiful view of the town from the Cloak Bridge, which spans the castle ditch. It has one of the most photogenic views of Krumlov. The town spreads out behind the thrumming weir, a church tower pokes out from Parkán. The Cloak Bridge is photogenic, even from below because it was built as a viaduct.

There is a very beautiful view from the castle tower but you have to pay. You can either buy a ticket
to the tower only or in combination with the castle museum. We chose the second option only to
sprint through the museum to get to the tower before they closed it. In the end, we were the last to
leave the tower, the man who locked the doors behind us told us about other local interesting
places.

Visiting the interior of the castle is possible only with an organized tour group. It is good to buy the
ticket in advance on the internet. There are two routes. The first one covers renaissance and
baroque apartments, the second one goes through the Schwarzenberg’s apartments from the first
and second half of the 19th century and finishes with the visit to the passages of the Cloak Bridge.

We chose route one and I have to say that the presentation was very interesting. I also learned various
curiosities, for example, that children were painted with adult faces because people believed that
ensured that they would live to adulthood. There were no children’s clothes, the little noble ladies
wore smaller variants of adult clothing which weighed many kilograms. The beds were short because
they slept in a semi-sitting position. There was a superstition that if you lay flat in your sleep, you
would die before morning because the prone position is for the dead. In one of the rooms, there is
an ostentatious gold-gilded carriage, which never carried any people as it was commissioned by Jan
Antonín von Eggenberg to take presents to pope Urban VIII. The tour route finishes in the
Masquerade Hal. Its walls are covered with pictures of life-size merry masked visitors to a ball.

During our weaving through the Krumlov streets, we would occasionally dive into one of the
museums. You can visit the Museum of Trade for free and look around several rooms full of goods which
used to be sold here. The visit takes about a quarter of an hour. The small Museum of Moldavites has
an exhibition of this mineral in various shapes and sizes, shown in beautifully lit display cases in the
middle of a dark room. You can watch an 8-minute film which explains the origins of Moldavites and
where to find them. You can also try a simulation of a meteorite fall.

By the Regional museum, there is a terrace which we found by a chance and were delighted with.
There is a beautiful view of Český Krumlov from a different angle to that from the castle. In the
Regional Museum you can find an exhibition on the history of Český Krumlov from prehistory till
present. During our visit, there was also the exhibition “With Lion for Freedom – Czechoslovak
Independent Armoured Brigade in the Second World War”, which attracted quite a few people. Ben
loved it. I was more attracted by the large ceramic model of Český Krumlov, as it looked around the
year 1800.

We also visited St Vitus church, the dominant of Parkán. St Vitus is a late Gothic church built
between 1407 – 1438. It was a rebuild of an older building, which could not contain the number of
believers from the expanding town.

We also walked to the Synagogue, which was built in 1909. It was the first building in Austro-
Hungarian Empire to use reinforced concrete construction. Unfortunately, it was not opened.

When doing lots of walking and looking it is also necessary to get a proper meal.
Everybody, from our parents who visited Krumlov shortly before us, to our taxi driver recommended
Papa’s Living Restaurant to us, with its terrace on the Vltava embankment. Their cooking is truly
delicious and I can only join in recommending it. We had, as a vegetarian meal, tagliatelle with
porcini and cream sauce. We also had a nice meal and pleasant service in the pizzeria Nonna Gina and
lovely ice cream in the café near the synagogue.
In Krumlov, there is no problem to find a good restaurant serving vegetarian meals. In Jakub
Restaurant & Café we had lovely porcini risotto and as a bonus, we could have a look at the paintings
of ‘residents’ of Number 54, depicted looking out of their windows. Similar pictures in windows can
be seen in various places throughout Český Krumlov. Is it one of the local curiosities?

One day we left Krumlov for Lipno to visit the Treetop Walk. I always wanted to visit it and when I
found out that it is only half an hour by car from Český Krumlov I did not hesitate and persuaded Ben
to go there.

We got up to the Walk by a cable car, though it is possible to walk. We presented the tickets we
bought at the bottom and then ascended the wooden pathway higher and higher. Sometimes a
notice on the side pointed out how high we were and how old the trees below were. At places, we
were surprised by wooden sculptures of various birds sitting on the banisters.

The walk had several stops with information panels. We could also return to childhood on various
monkey tracks which branched off the main path. It was amusing to watch adults lose all seriousness

and jump from one movable platform to another or balance on a rope. Of course, we had to try as
well. It wasn’t too difficult. The key to keeping your balance was to not look down through the safety
net. The height could make your head spin.

At the end, the walk turns into a spiral climb to a viewing tower which finishes this treetop
experience. From the top, we could see the Lipno dam, Black Forest, and far away the silhouettes of
the Alps. Then came the best bit – from the viewing tower we went down by toboggan! The tickets
for the toboggan are sold separately at the Walk’s entrance. When I saw the height I got a bit scared.
But because I was looking forward to this ride, I threw myself down with a war cry: “I won’t be
scared! I will enjoy it!” And I did enjoy it. The ride was not too fast – just enough – and in a moment
the toboggan spat me out at the base of the Walk, crowning the experience. We had lunch in the
local restaurant, bought a few souvenirs, and returned back to our Krumlov ‘home’.

The whole trip was a very pleasant experience. Český Krumlov was great and to see it without
crowds was a once-in-a-lifetime opportunity. 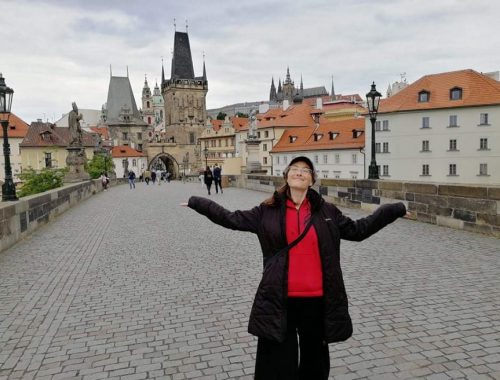 Being a Tourist in Empty Prague